Ray Harryhausen and the Creation of Dynamation


Ray Harryhausen was the stop-motion animator extraordinaire behind such fantasmagorical creatures as the fighting skeletons, the cyclops, Medusa, Kraken, and the beast from 20,000 fanthoms in such classics as "Jason and the Argonauts" ( 1963 ), "The 7th Voyage of Sinbad" ( 1958 ), and "Clash of the Titans" ( 1981 ).

As part of our tribute to the late Ray Harryhausen we thought we'd include a brief introduction to the process he created known commercially as Dynamation. It can also be called the "split-screen" process because of the way the screen appears to be split while the animation is being enacted in the middle layer.

Prior to Harryhausen's development of this technique most animation was created for sequences that did not require "live" actor interaction within the scene. For instance, in an adventure film a group of archaeologists may come across a dinosaur grazing on grass in the distance. The director of the movie would film the actors expression of surprise upon seeing the dinosaur and an animator would film the stop-motion sequence of the dinosaur but when completed these scenes would remain separate...actors in one scene, animation in another. However, with the split-screen process, viewers were able to see the actors directly interacting with the animation..e.g a dinosaur with a man struggling to get free from his grasp.

In three-dimensional stop-motion animation, an object, or a poseable model, is photographed one frame at a time using a traditional film camera. In between each frame the animator moves the arms or legs of the model a fraction of an inch before photographing the object again. When these still shots are run through a projector the rapid succession of images creates the illusion of movement. A standard 35mm film projector runs the film at 24 frames per second, and so 24 separate photographed frames have to be taken to make each second of animation on screen. Hence, a 2-minute sequence of a giant cyclops eyeing a tasty morsel for dinner would take 2,880 separate frames to compose. Quite a time-consuming task!

Stop-motion animation can be traced back to the beginning of movie-making, in the late 1800s.  Some of the earliest animated films include Vitagraph's "The Humpty Dumpty Circus" ( 1897 ) by Albert E. Smith and J. Stuart Blackton, featuring a circus of acrobats and animals coming to life, and "The Haunted Hotel" by J. Stuart Blackton ( 1907 ).

Willis O'Brien was the resounding king of animation during the early days of talking pictures. He brought to life the prehistoric creatures of yor in First National Pictures adaption of Arthur Conan Doyle's "The Lost World" ( 1925 ) and later, in one of the most iconic films of the century, "King Kong" ( 1933 ), where he created a creature so lifelike in appearance and emotion that many viewers were brought to tears at his demise at the end of the film.

Under O'Brien's tutelage, Harryhausen learned the filmmaker's craft from the ground up and by 1948 was working alongside O'Brien on his first feature film, "Mighty Joe Young" ( 1948 ). O'Brien had utilized the multi-dimensional process of interacting animation with the actors through the means of sandwiching his models between two glass paintings, one of which was painted foreground, and shooting "through" them with the camera.

It was while working solo on his second feature film ,"The Beast from 20,000 Fanthoms", that Harryhausen realized what a tiresome and time-consuming process painting foreground could be and knew that it would never work for that particular film due to the low budget the production had. He had been experimenting with using mattes as far back as 1938 to create a "split-screen" and so on "The Beast from 20,000 Fanthoms" he put those tests to use.

The split-screen was a simple process that used mattes to block out portions of the film. Since film only develops from the light that escapes through the eye of a camera, any portion that is blackened out remains undeveloped. If the film is rewound the portion that was blackened can then be used again. This technique was used as far back as the early 1900s.

Dynamation however, used a model in between the matte and the background image to create a three layered image. The first step in the Dynamation process was to plan out in detail the movements the model, or creature, was to make and then to film the live-action scene with the actors and usually a stick or stand-in crew members to represent the movements and position of the creature.

This film was developed and rear-projected on a screen. Harryhausen would place his model on an animation stand in front of this screen and then place a large pane of glass in front of that. On this glass he painted in black the foreground that he wished to block out. After filming the animated sequence so that the creature interacted with the actors as planned, he then rewound the film and filmed through the glass again, this time with the image he had previously filmed blackened out.

Although it sounds like a very tiresome process, it was actually much easier to utilize mattes then to build and film miniature sets for the models to move in.

In 1957, Charles Schneer, the producer of many of Harryhausen's films during the late 50s and 1960s, dubbed this split-screen technique Dynamation. He was sitting in his Buick one day while waiting for traffic and noticed the Dynaflow logo written on the dashboard...he thought the prefix dyna would be the perfect marketing term for Harryhausen's animation process.

"Dynamation will be brought to the screen for the first time in COLOR!"

In the short trailer "This is Dynamation!" ( 1957 ) used to promote "The 7th Voyage of Sinbad", the narrator announces the glorious wonders of the technique and how "anything that the mind can conceive can now be brought to the screen". 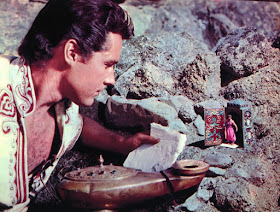 Dynamation was utilized on all of the Ray Harryhausen films up until his final feature motion picture, "Clash of the Titans" in 1981. Today, most special effects are created using computer graphic programs ( CGI ) but somehow, in spite of the amazing realism provided by digital graphics there is something very unique, very alive, about Harryhausen's technique. Perhaps the creatures we see created by computer effects have lost their awe because we know the secret behind their existence  The mysterious process of Dynamation was kept from the public during the release of many of his biggest films... and this was one more element that added to the magic of the Harryhausen pictures.