The Films of Ray Harryhausen

Ray Harryhausen was one of Hollywood's most famous stop-motion animators and most influential special effects innovators. Prior to the development of computerized special effects, stop-motion animation played a key role in adventure and sci-fi filmmaking from the 1940s up until the 1980s. Of those that were skilled in this technique there were relatively few. Ray Harryhausen not only mastered the slow and delicate art of animation but he made large strides in what can be done - with a little bit of patience - using simple models and photography.

When "Jason and the Argonauts" hit the big screen in 1963 audiences were in awe of Jason's fight against the army of skeletons. Harryhausen breathed life into those inanimate objects with bone-clattering violence. A pterodactyl silently swooping down upon a lone cave woman, a goddess taking the form of a ship's figurehead, a giant bronze statue creaking to life to wreak vengeance on the men who stole the sacred treasure of the gods, these were all memorable moments on screen that not only seemed amazing in youth but continues to astound today, even in the midst of mind-boggling CGI effects.

George Lucas, claimed that "if it hadn't been for Harryhausen there would have never been a Star Wars". Directors Peter Jackson and James Cameron also cite Harryhausen as their inspiration and his films their incentive to pursue film-making as a career.

This post is called The Films of Ray Harryhausen because, although he was not an auteur filmmaker and his role in the movies that he made could not be confused with that of the director, he did much more than his simple credit of "special visual effects" justified. It was often Harryhausen who proposed the initial story concept, scouted the locations, helped work on the script, the art direction and the design of the film. It's no wonder that these films have a distinguishable style that sets them apart from other adventure films of the era. They all bear the Harryhausen stamp.

A young girl in Africa raises a gorilla and must decide whether to expose him to the "jungle" of New York when a promoter decides to exhibit the creature. Terry Moore, Ben Johnson, Robert Armstrong. Directed by Ernest Schoedsack.

The stop-motion Pioneer Willis O'Brien, was approached by a teenage Ray Harryhausen in the early 1940s and asked if he could study under him, O'Brien told him to go to art school and practice his craft all he can. He did, and later, in 1948, O'Brien asked him if he would like to work with him on his upcoming picture "Mr. Joseph Young of Africa". Did he! "Mighty Joe Young" was essentially a remake of Willis O'Brien's own classic "King Kong" ( 1933 ), but it became the launching pad into a world of feature film animation for Ray Harryhausen.

"The Beast from 20,000 Fanthoms" was Harryhausen's first solo project and the film where he developed the split-screen animation technique which was later to be known as Dynamation. "Beast" was a great commercial succcess and opened the doors to greater projects for Harryhausen.

Following the success of "The Beast from 20,000 Fanthoms", came this creature flick from out of the primordial depths of Charles Schneer's imagination. The young producer from Columbia Pictures was introduced to the budding animator and together they created this monster classic - as well as a partnership that spanned over three decades.

What better way to follow up a monster movie than to make a sci-fi film? And no sci-fi film would be complete without retro UFOs. "Earth Vs the Flying Saucers" contains an excellent sequence of the alien flying discs attacking the nation's capital, Washington D.C.

A giant reptilian-like creature from Venus stows away on the return flight of a US spaceship and wreaks havoc in Europe. William Hopper, Joan Taylor, Frank Puglia.

The death of the giant prehistoric Ymir - part dinosaur, part fish - at the close of this film was reminiscent of Willis O'Brien's classic "King Kong". Harryhausen always wished to create his own legendary figure that would move an audience to feel pathos at the creature's demise, much like Kong did, and with "20 Million Miles to Earth" he succeeded in doing just that. 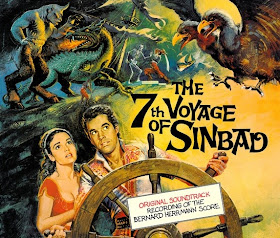 Sinbad undertakes a quest to a mysterious island to obtain the ingredients to cure a princess of a curse she received by a wicked magician. Kerwin Matthews, Kathryn Grant, Richard Eyer, Torin Thatcher.

"The 7th Voyage of Sinbad" was Harryhausen's first foray into the realm of color filmmaking. Although he had done a number of short stop-motion animation films in color this was the first time he would experiment with Dynamation in color. Within his studio confines he had the added hassle of matching the lighting and coloring of his filming with that used in the live-action sequences. The result was stunning. "The 7th Voyage of Sinbad" remains one of Harryhausen's most memorable movies.

A man is washed away during a storm at sea and lands on an island inhabited by little people...Lilliputians. Kerwin Matthews, June Thorburn, Jo Morrow, Lee Paterson.

"The 3 Worlds of Gulliver" is one of the least known films of Harryhausen, notably because of the lack of any large beastly creature. It has, however, some really great special effects and was the first of his films to be billed as using the "Superdynamation" process.

A group of prisoners of war during the Civil War escape in an air balloon and are washed ashore on an island inhabited by strange beasts and a mysterious visitor. Michael Craig, Joan Greenwood, Michael Callan, Gary Merrill.

After Ray Harryhausen's modifications to Jules Verne's 1874 novel, "Mysterious Island" did not bear much resemblance to its source, which is just as well. Verne's sequel to "20,000 Leagues Under the Sea" did not contain much excitement in itself, but with Harryhausen's additions of a giant man-eating crab, an underwater city, a prehistoric baby bird attack, a 15ft. tall bee, and pirates, it was a beaut.

The Greek hero, Jason, sets off on a voyage, along with a hand-picked crew, to the land of Carcus to capture the golden fleece. Todd Armstrong, Nancy Kovack, Gary Raymond, Laurence Naismith.

Undoubtedly Harryhausen's most famous film ( it is his personal favorite as well ). This mythological classic featured the stunning skeleton sword fight, Talos the giant guardian of the god's treasures, and the six-headed hydra. Although it was not a box-office success upon its release it gained momentous popularity in the decades since and is now regarded as one of the greatest adventure films of the 1960s.

The life of a lone caveman and his mate in a land inhabited by dinosaurs and hostile neighbors. John Richardson, Raquel Welch, Percy Herbert.

In the Forbidden Valley in Mexico resides a Tyrannosaurus Rex whom a cowboy captures to gain fame by exhibiting in a circus. James Franciscus, Gila Golan, Richard Carlson.

Back in 1941 Willis O'Brien conceived of a dramatic dinosaur western and called it "Gwangi". His pet project was never realized until Ray Harryhausen pitched the idea to Charles Schneer in 1967. "Gwangi" contains one of Ray's most elaborate animation sequences - the roping of Gwangi by cowboys.

Sinbad meets a vizier who has part of a golden map, one of the which parts matches Sinbad's own, and together they voyage out to solve the riddle of the map, with an evil sorcerer on their tail. John Phillip Law, Caroline Munro, Philip Baker.

After the completion of "Jason and the Argonauts" in 1963, Ray Harryhausen wanted to develop another Sinbad adventure, intending on calling this feature "Sinbad's 8th Voyage". The idea was placed on the back-burner however until 1969 when it was put to simmer once more and developed into what became "The Golden Voyage of Sinbad". The dancing statue of six-armed Kali and the one-eyed centaur are just some of the highlights of this rousing adventure. 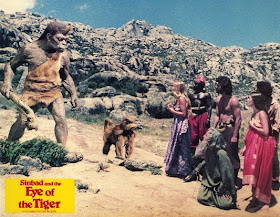 Sinbad helps a cursed prince by sailing on a voyage to a dangerous island to seek a cure, whereupon a witch attempts to thwart their plans. Patrick Wayne, Taryn Power, Margaret Whiting.

Sinbad returned to the screen once more in this thrilling installment which included the classic baboon prince and the evil sorceress Zenobia. Harryhausen developed a plot treatment of the story back in 1974 but it was not until 1976 that filming began.

Perseus goes on a journey to save the Princess Andromeda and encounters Kraken, a sea monster and Medusa along the way. Laurence Olivier, Maggie Smith, Harry Hamlin, Claire Bloom.

"Clash of the Titans" was given an enormous budget of $16 million by MGM to make ( Columbia had turned down the project ) but it went on to become a worldwide success raking in $41 million in the U.S alone. Beverley Cross, the screenwriter who worked on almost all of Harryhausen's films, developed the premise for this story, which was billed as "An Epic Entertainment Spectacular". 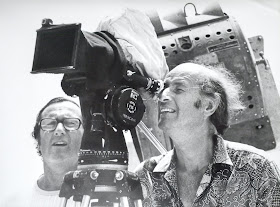 Hence, "Clash of the Titans" became the final film in Harryhausen's fantastic filmography. Perhaps in the future one of his ardent fans, such as Peter Jackson, may resurrect "Force of the Trojans" and make it the classic it would have undoubtedly become. Although, they must be careful how they go about it for as Harryhausen once said " If you make things too real, sometimes you bring it down to mundane ".