Steven Bingen, co-author of the fabulous book, MGM: Hollywood's Greatest Backlot, has sharpened his pencil and put words to paper once again in his marvelous new tribute to the WB backlot : Warner Brothers - Hollywood's Ultimate Backlot. This hefty 275 page coffee table book covers the inner and outer workings of one of the best studios in the business. It is chock full of behind-the-scenes Warner Brothers images from the Bison Archives and features a short but sweet introduction from the WB starlet herself, Doris Day.

The Jeer : It's hard to find fault with this book, but if there is to be a jeer it is in the design layout of this particular edition. Unlike MGM: Hollywood's Greatest Backlot, which featured a fantastic layout for reference use, this one turns the spotlight on Bingen's writing and utilizes its layout for great cover-to-cover reading but is hard to navigate for the info seeker.

The Cheer : Steven Bingen has written a loving tribute to the real star of Warner Brothers Studios - the backlot; its fabulous sets and the creative team who helped to create them. The rare images are a delight and the appendix "Productions Shot on the Backlot" is worth the price of the book itself.

The Skinny : Warner Brothers - Hollywood's Ultimate Backlot makes a great read for the avid classic film fan but would have benefited even more had it duplicated the layout of MGM: Hollywood's Greatest Backlot.
The Metzinger Sisters at 9:41 PM 1 comment:
Share

Merry Christmas to one and all! We wish everyone a blessed and joyous day and here's hoping you find a little June in December!
The Metzinger Sisters at 10:55 AM No comments:
Share 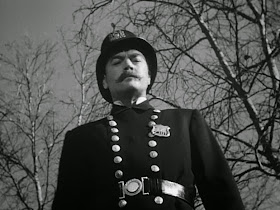 One of New York's finest is giving one of the city's solid citizens a stern facial reprimand. It's not your job to find out who is making the trouble nor to guess who this mustached cop is.... just name the title of the film this scene is from. Isn't that easy now! Don't worry, we won't be handing out tickets for wrong guesses.

As always, if you are unfamiliar with the rules to the game or the prize, click here.

Anonymous correctly guessed "O'Henry's Full House" ( 1952 ). This jolly cop was looking down upon Charles Laughton who was sleeping on a park bench in New York City.
The Metzinger Sisters at 10:17 PM 6 comments:
Share 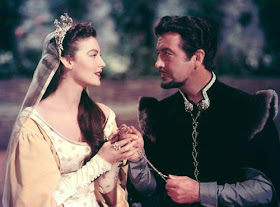 
King Arthur earns the throne of England and leads the kingdom into its happiest days, until the wicked Mordred plots to undermine his rule by claiming Sir Lancelot is having an affair with Queen Guinevere. Robert Taylor, Ava Gardner, Mel Ferrer, Stanley Baker. Metro-Goldwyn-Mayer. Directed by Richard Thorpe.

Considering that the King Arthur fables are as old as dust it is surprising that an earlier version of Knights of the Round Table was not made. This film plays out like a Technicolor MGM remake of a superior 1930s Warner Brothers swashbuckler. Robert Taylor is quite good as Sir Lancelot and Baker is as menacing as ever, but Gardner fails to impress as Queen Guinevere. She just doesn't have the makings of a noble, self-sacrificing queen. Overall, it's a fun sojourn into the merry medieval days of yor and the writers managed to condense a very lengthy legend into a tidy 2 hour film. 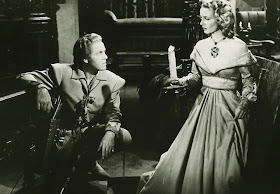 
A young noble returns from the War of the Roses to find his father has been slain by his wicked uncle. With the aid of an outlaw, the Black Arrow, he vows to avenge his father's death and clear the name of the fugitive who was blamed for this crime.  Louis Hayward, Janet Blair, George Macready. Columbia Pictures. Directed by Gordon Douglas.

Based on a famous novel by Robert Louis Stevenson, The Black Arrow, is an entertaining swashbuckler from Columbia Pictures but fails to become a memorable film in spite of its talented cast. Louis Hayward, at age 39, is rather old to be the impetuous youth the role called for. Keep your eyes out for the man dressed in drag happily waving to Sir Brackley when he enters the court. We don't know what that was all about. 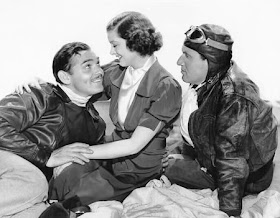 
A test pilot crash lands his plane on a Kansas farm, falls in love with the lady he meets there, marries her and then spooks her out of her wits on a daily basis with his reckless test flights. Spencer Tracy, Clark Gable, Myrna Loy. Metro-Goldwyn-Mayer. Directed by Victor Fleming.

Test Pilot was planned to be Metro's big all-out production of the year. They took their most bankable stars and gathered them together for this film which was based on an original story by a formal naval test pilot. It became the smash-hit they hoped for and united those onscreen lovebirds - Loy and Gable - for the third time. Tracy and Gable united just once more ( for Boom Town ) even though they didn't hit it off on the set of Test Pilot. Nevertheless, they had great comradery onscreen and turned a simple plot into a believable action film. 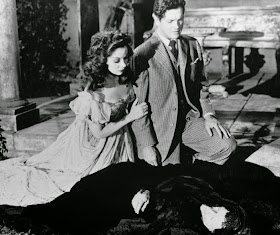 
A publisher travels to Venice to purchase the lost love letters of a 19th century poet and winds up falling in love with the schizophrenic niece of the poet's old lover. Robert Cummings, Susan Hayward, Agnes Moorehead. Universal Pictures. Directed by Martin Gabel.

This movie is depressing as heck. The cinematography is really nice and the story line great but the overall feel of the film just didn't allow us to warm up to it. Robert Cummings was best in comedy roles and always seems miscast in films with characters that must show really deep thought. Moorehead's makeup job was great though. The film managed to return only half of its initial budget. A small failure for Martin Gabel, the director, taking the helm on his first production. 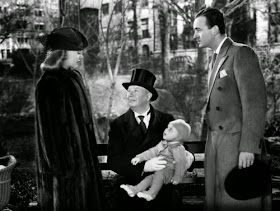 
Worried that the baby would fall, a department store salesgirl scoops up an infant left on the doorstep of an orphanage and then finds herself mistaken to be its mother.  Ginger Rogers, David Niven, Charles Coburn, Frank Albertson. RKO. Directed by Garson Kanin.

RKO had a knack of creating low-budget films with high-budget entertainment quality. This one sparkles with humor, light drama, and the requisite romance. The film trots along at a brisk pace and all of the principal actors play their roles delightfully. Alas, Rogers only gets to do one twirl around the floor but the comedy more than makes up for the lack of toe-tapping scenes. A great after-Christmas-before-New-Year-film!
The Metzinger Sisters at 10:07 PM 3 comments:
Share 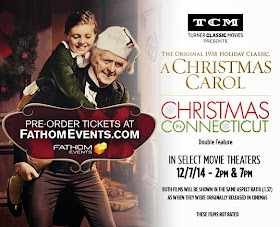 Hot marshmallows! Just when we were giving up hope of seeing any good classics on the big-screen this December, Fanthom Events released this drool-worthy bit of news : TCM is bringing A Christmas Carol ( 1938 ) and Christmas in Connecticut ( 1945 ) to the big screen in select theaters nationwide. It's a double feature!

"Double the pleasure, double the fun, it's the statement of a great film...."

Of course, most of our readers probably heard this already so you're thinking it is old news, but we're spreading the word for those anti-cable folks like ourselves who live in the dark ages when it comes to hearing the classic film set scoop. There's no time to debate about attending which showing because the films are playing one day only, and that one day is this Sunday. You can catch the films at 2pm or 7pm.

To make things extra gooey-gumbo delicious : White Christmas ( 1954 ) will also be showing in select theaters on December 14th and 15th in a new digital transfer to celebrate the 60th anniversary of this holiday classic. Oh boy, it really is a wonderful life!