A warm and humorous look at the life of one George Apley, a 100% proof Bostonian - during the first decade of the 20th century, and the circumstances leading up to his children's marriages.  Ronald Colman, Peggy Cummins, Edna Best, Richard Haydn, Richard Ney, Mildred Natwick. Directed by Joseph Mankiewicz. 20th Century Fox.


Mr. Blandings decides that he is ready to chuck the city life to live in the country, only the house he has purchased needs to be tore down and rebuilt ( and his pockets emptied ) before he can settle in tranquility. Cary Grant, Myrna Loy, Melvyn Douglas, Reginald Denny. Directed by H.C Potter. RKO Pictures. 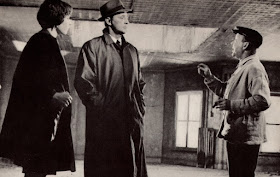 
A recently divorced lawyer from Nebraska tries to start his life anew in New York with a young dancer, but finds that he is tied to his past more strongly than he realized. Robert Mitchum, Shirley MacLaine. Directed by Robert Wise. United Artists.

Lloyd Nolan couldn't be more endearing as Shayne than he is in this film With his mischievous little grin and that twinkle in his eyes, he's a regular Irish leprechaun. Blue, White and Perfect moves along sprightly and takes us on a fun ride. "Perfect" entertainment.

"They Met in Bombay" began like a classic 1960s caper - exotic locations, two beautiful jewel thieves, a perfectly planned scheme - but once the theft was completed and our two thieving heroes were making their getaway the plot took some highly improbably turns. Great entertainment on the whole.