A travelling actor is chosen as the bearer of a secret pirate map marking the whereabouts to treasure in gold, by a crazy old man, one of the Hook's disloyal men. Disguised as a woman he escapes with a captured princess from the pirate ship but finds himself in the scurviest town he ever laid eyes on, with Hook chasing after him and the secret map. Bob Hope, Virginia Mayo, Walter Slezak, Victor MacLagen. Paramount, 1944. Directed by David Butler.

This film features sumptuous color, exceptional sets, beautiful costumes, the lovely Virginia Mayo and Bob Hope, always quick with the one-liners, but the plot is rather flat and the actors seem at a loss at what to do with the story. A shame too, because this could of been a real gem....now it just remains a routine comedy. 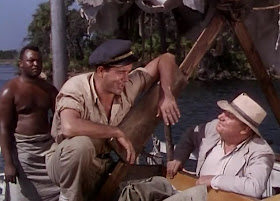 An adventurous sailor takes on a job of using his beloved yacht as a diving vessel, searching for pearls, but finds he has been framed in an illegal activity and his yacht confiscated  He joins forces with two water rats and a beautiful lady and hunts after the culprit who is now searching for stolen gold in the jungle. John Payne, Rhonda Fleming, Forrest Tucker, Alan Mowbray, John Abbott. Paramount, 1951. Directed by Lewis R. Foster.

This was a fun film to watch. The entire movie was obviously filmed in Florida, and not New Guinea, and John Payne could of had a little more punch to his character but the color was wonderful, the settings were great and Rhonda Fleming looked ravishing, so who's complaining? The ending was very abrupt though..within three minutes Fleming changes her attitude of disgust with Payne to love and they sail off in the sunset. We are left wondering who got the gold and what made her change her mind. 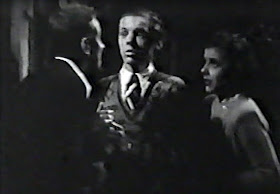 Henry Aldrich accidently drinks an experimental potion which he believes gives him super-human strength. When the school professor is found missing and believed dead in the very haunted house Henry visited the night before, he and his friends believe he is a "fiend" in disguise. Jimmy Lyndon, Charles Smith, Joan Mortimer, John Litel, Mike Mazurki. Paramount, 1943. Directed by Hugh Bennett.

Henry Aldrich doesn't need to haunt this house...it's filled with ghouls, ghosts, gorillas and gangsters already! Jimmy Lyndon is a riot as humble Henry, always innocent and yet always getting himself into mischief. The real star of this film is Charles Smith though. As Henry's pal "Dizzy" he steals every scene he's in with shaking, quaking and stuttering. The film plays out like an original Scooby-Doo mystery.

A toy-maker has his wish come true when the Blue Fairy turns his favorite marionette Pinocchio into a talking, walking little boy..although still wooden. In one short day Pinocchio gets himself into mischief by joining an acting troupe, almost being turned into a donkey, and being swallowed by a giant whale. Jiminy Crickett stands by the boy as his "conscience". Vocal talents of Mel Blance, Don Brodie, Dickie Jones. Walt Disney Studios, 1940. Directed by Norman Ferguson.

Truly a remarkable work of animation. In one scene in particular the camera pans from the top of a village church, down into the street, around the corner, and right into the house through the window. Amazing.... the story is touching, humorous, and exciting all at once. 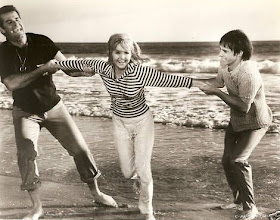 Two parents accompany their teenage son on his tour of Europe with his girlfriend. Once in Europe they find their marriage on the skids when a French playboy makes advances at mama. James Garner, Debbie Reynolds, Maurice Ronet, Terry-Thomas, Paul Lynde. Universal Pictures, 1968. Directed by Jerry Paris.

At first, judging from the first five minutes, I thought "heaven forbid, another 1960s sex romp"....which, alright, I admit, this essentially is...but its a darn good one! The comedic talents of Debbie Reynolds and James Garner make it so. They are such a good team here that it makes me wish they had a TV series together. Well worth watching, even for those who cringe at the freedom displayed by those of the psychedelic age.