A Yank at Oxford, MGM's first production filmed at Metro's newly built studio in Britain in 1938, was such a smash hit on both sides of the pond that Mayer decided to duplicate it with another one of the studio's biggest actors, Mickey Rooney, in the lead. This time, the cocky American is on his way to Eton, England's famed preparatory school for boys. Just like the original, the screenwriters managed to pen an entertaining story about the conflicting attitudes of Americans and Brits without showing favoritism to any one nationality. What ho! 
A certain nurse is a demure woman by day with a hatred for a particular childhood friend. By night, she turns into a vixen with a yen for this same friend.  Loretta Young, Joseph Cotten, Cecil Kellaway, 20th Century Fox Pictures. Directed by Richard Sale.

Loretta Young is delightful in this silly but highly entertaining comedy about a nurse with a bad case of sleepwalking. It seems her repressed love for a soon-to-be Congressman causes her to declare her love for him in her sleep, only she isn't really sleeping, it is just her second personality coming out at night. Young and Cotten are in top-form but the film should have been a bit longer than its 77-minute run time for its tacked-on ending came much too quickly and made the whole story seem very improbable ( which it is ). 
To help relieve the housing shortage in Washington D.C, a young woman rents her single apartment to an old bachelor who in turn sublets his half to a young bachelor with the intention of match-making the two chickadees. Jean Arthur, Joel McCrea, Charles Coburn, Richard Gaines. Columbia Pictures. Directed by George Stevens.

The More the Merrier is one of George Stevens' most famous comedies, and justly so, for it is a gem of a great film and you'll have a hard time containing your laughter during the first half-hour. After that, however, things start getting a little zany and the humor becomes less-visual and more verbal, which - in the opinion of this fan - isn't quite as entertaining as pie-in-the-face comedy. Jean Arthur gets top-billing, but it is jiggle-jowled Charles Coburn who steals all the scenes in his role of Mr. Dingle. Cary Grant came no where near imitating Coburn's natural comedic talent when he took on the role of the aged cupid in the 1966 remake, Walk Don't Run. Jeanne Crain made a slew of light-hearted dramas in the late 1940s and 1950s, none of which were above average in terms of production quality ( with the exception of A Letter to Three Wives ) but most of them serving above-average entertainment. This particular film failed to follow suit. The film features beautiful color photography, some handsome looking fellows, and a motley assortment of top-notch actors and character players, but the plot ( based on a book ) left more to be desired. The screenwriters - the Epstein brothers no less! - should have mimicked A Letter to Three Wives and tossed in a good dose of humor in between all the dramatics. Keep your eye out for a young Mitzi Gaynor as a brunette. 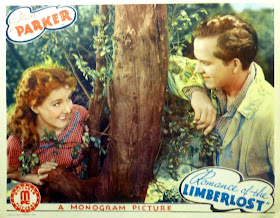 
An innocent young girl who is living in bondage under her aunt in the swamplands, dreams of escaping to town and educating herself. Jean Parker, Eric Linden, Marjorie Main. Monogram Pictures. Directed by William Nigh.

Jean Parker was such a lovely actress and I really can't picture anyone else portraying an Anne Shirley part like this than her. "Laurie", the girl of the Limberlost, is your typical novel heroine, a sweet young thing who did no harm to anyone but finds her life full of oppression and people wanting to do her harm. Gene Stratton Porter penned the popular novel which this film was based on in 1905. Many of Porter's other books ( such as Laddie ) were turned into films by Monogram and other low-budget studios, but this one stands out for its innocence. If you are looking for a good story served up in old country fashion then look no farther than the Limberlost.
The Metzinger Sisters at 10:04 PM
Share