Alfred Hitchcock had just wrapped production on Rear Window when he plunged into his next film To Catch a Thief. This picture would unite Cary Grant, whom he coaxed away from retirement, and his favorite leading lady, Grace Kelly. Hitchcock had purchased the rights to David Dodge's Cannes caper in 1950 for the meager sum of $15,000 but it was not developed into a script until after he met John Michael Hayes ( Rear Window ), a screenwriter who had a great wit. Hitchcock wanted To Catch a Thief to have a comedic flair that was lighter than pastry.

The film begins with a series of daring night jewel thefts throughout the Riviera. John Robie "The Cat" has struck once again - or so the police are led to believe. The real John Robie, once a famous jewel thief, is blissfully enjoying his retirement at his cliff-side villa outside Monaco. He does not like this new cat burglar imitating his signature style nor having the police breath down his neck with their air of suspicion. And so he sets out to capture this "cat" himself, and what better way then to set a thief to catch a thief.

With the aid of a Lloyds of London insurance broker ( John Williams ), Robie obtains a list of the most valuable pieces of jewelry insured in Monaco and the names of the fashionable tourists who own the baubles. First name on the list - Jessie and Francine Stevens ( Jessie Royce Landis, Grace Kelly ) a mother and daughter who have nearly $280,000 in jewels insured with the company.

Robie finagles his way into meeting the American duo through a clever ploy of dropping a 10,000 franc piece down the bodice of a woman's dress while they are all gathered at the roulette table - the "whirling pickpocket" as Mrs. Stevens calls it. This gets her to laughing and leads him to introduce himself as Mr. Burns, a lumber tycoon from Oregon. 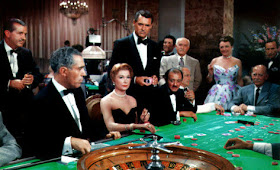 The first time we see "Francie" she is perceived as being a jewel herself, sparkling but cold as a diamond. She and her mother stemmed from the backwoods until oil was discovered on their land; extensive travelling polished her country manners and accent. After years spent away in finishing schools, she has the stance and demeanor of a young princess. Her mother is quite captivated by Mr. Burns charms ( "If I were Francie's age, you'd sound too good to be true!" she declares ) while Francie seems disinterested. She's young, beautiful, and wealthy so she has been chased quite a bit by fortune hunters and is wary of handsome men. Perhaps Robie is too good to be true. 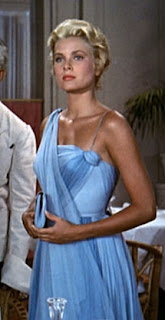 "I'm sorry I ever sent her to that finishing school, I think they finished her there."

Edith Head designed all of the costumes seen in To Catch a Thief and they rank as some of her finest creations. Alfred Hitchcock had a hand in this design process too and the clothing that Francie wears throughout the film reflect on her different moods. In this scene her gorgeous white and icy blue layered chiffon gown make her regal and quite unattainable.

Later, when John Robie escorts her to her hotel room, she spontaneously kisses him - and then gently shuts the door in his face. This kiss proved that she was neither as innocent or as frigid as she appeared, merely bored. Francie literally lets her hair down the next day. She appears dressed in sunny yellow and is eager to spend the day with Mr. Robie. After a swim in the rich blue Mediterranean and some verbal sparring with him and a young French woman, she invites Robie on a very informal outing, a picnic, en route to the villa that Mr. Burns is supposedly going to look at to purchase ( "I may even retire here" he says ). It's not a European champagne and cheese affair, but a classic American picnic of fried chicken complete with cold beer.

It is during their drive from the villa that we see a different side of Francie emerge. Parts of her down-home heritage peep through showing she was not "finished" completely as her mother believed.

She's a gal with spunk and quite a large dose of womanly wiles, in spite of her demure pink and white summer dress. Francie has her suspicions about Mr. Burns and quickly becomes the hunter. She is eager to pin her "cat" into a corner to see him confess his real identify, that of being John Robie. She excitedly declares how she played Sherlock Holmes to discover all the clues that led to this conclusion. The scenes leading up to this moment are some of the best in the film featuring an exciting and humorous car chase, breathtaking Moyen Corniche location scenery, and extremely witty dialogue filled with double-entendres ( including the famous quote "a leg or a breast?", referring to the chicken, of course ). 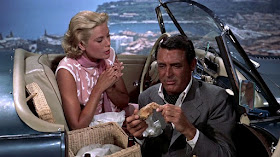 Hitchcock loved the duel meaning the title suggested and it is after this scene that we see it come into play, the audience is eager to see Francie catch her thief - John Robie - regardless of whether Robie discovers the real culprit behind the jewel thefts or not. After she falls in love with him- as we, the audience, knew would eventually happen, she aids him in setting a trap for the burglar, leading to the climax at the costume ball, where Francie once again sports a head-turning gown, this time completely decked in gold. 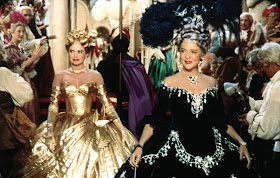 To Catch a Thief marked the third film that Kelly had made with Alfred Hitchcock and it is undoubtedly her best performance for the master of suspense. Like Lisa Fremont of Rear Window, Kelly portrays Francie Stevens as an extremely elegant young woman with a hint of mischief in her eyes. She isn't a china doll meant for display purposes only. She wants to love and serve a man and be a part of his life, even if it means endangering her own to prove this to him. The world premiere of To Catch a Thief took place in Los Angeles on August 3rd, 1955. It was a critical and commercial success upon its release and boosted Cary Grant's career, which eventually led him to postpone his retirement till over a decade later. To Catch a Thief is notable for leading up to the events of Grace Kelly's wedding. During the filming of the car sequence Grace Kelly had gazed out at the coastal countryside and spied a walled-in garden below. "Whose garden is that?" she asked screenwriter John Michael Hayes. He replied, "Prince Grimaldi's". Kelly had desired to tour the garden with her then-boyfriend costume designer Oleg Cassini but between her shooting schedule and the Prince's commitments was unable to arrange a visit. It was not until May 1955, when Grace Kelly returned to Monaco for the Cannes Film Festival showing of The Country Girl, that she was invited to the palace for a photo session and a tour of the garden. This meeting eventually led to the Prince visiting with Kelly's family in Philadelphia for three days and a marriage proposal. On April 18, 1956, Grace Kelly and Prince Ranier were wed and she became Princess Grace of Monaco.

On a sadder note, the winding road where John Robie and Francie Stevens park for their picnic lunch was the site where Princess Grace had her fatal car crash on September 13, 1982. She suffered a stroke behind the wheel and passed away a day later, at the age of 52, from a brain hemorrhage sustained from the accident.

This post is our contribution to The Wonderful Grace Kelly Blogathon being hosted by The Wonderful World of Cinema. Click on the links to read more posts on Grace Kelly's career and her films!
The Metzinger Sisters at 1:35 PM
Share