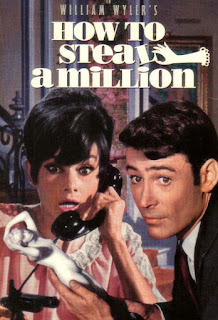 Audrey Hepburn loved Paris and audiences adored seeing her in Paris on film. She portrayed a young woman who journeyed to Paris to study cooking in Sabrina ( 1954 ), a shy bookshop clerk who longs to see the city in Funny Face ( 1957 ), and the daughter of a French private detective in Love in the Afternoon ( 1957 ). In the 1960s she was in love with William Holden in Paris When it Sizzles ( 1963 ) and that same year chased by four enemies throughout the city in the Hitchcockian suspense classic Charade. In 1966, Hepburn returned to Paris for one final outing, this time in the delightful caper How to Steal a Million, directed by William Wyler.

Wyler had a flair for sophisticated comedy and How to Steal a Million is reminiscent of the snappy comedies of the 1930s with its elegant setting and clever dialogue. Hepburn stars as Nicole Bonnet, the daughter of the world famous art collector Charles Bonnet ( Hugh Griffith ). Occasionally Monsieur Bonnet auctions some of his beloved paintings for "vast sums of money" and they pass into the hands of other avid collectors. What the buying public does not realize however, is that the paintings auctioned from the Bonnet collection are fakes - meticulously created by "Papa" Bonnet himself. Nicole wishes he would stop forging paintings and loaning their personal sculptures to museums, fearing they will one day be caught....especially since modern methods of examination could determine "the age of the stone, where it was quarried, when it was cut...and probably the name and address of the man who did it".

"Papa, the Cellini Venus is a fake!"
"That's a word we don't use in this house" 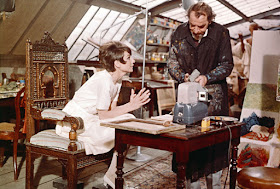 Her fears are realized when their Cellini Venus sculpture, which Bonnet generously loaned to the Kléber-Lafayette Museum of Art, is scheduled to undergo a vigorous chemical examination as a preliminary insurance requirement. Rather than arousing suspicion by recalling the sculpture from the museum, Nicole turns to Simon Dermott ( Peter O'Toole ), a professional jewel thief, to steal the Cellini Venus back. He and Nicole sneak into the museum at night and using only a magnet, a boomerang, and his wits, attempt to steal a million-dollar art treasure.

"Why must it be this particular work of art?"
"Why, you don't think I'd steal something that doesn't belong to me, do you?" How to Steal a Million was one of our grandmother's favorite films. Oma Rozi spent happy years in Paris and loved the city dearly. She also loved the lifestyle of the Bonnets, especially "Papa's" secret attic room. So this film is particularly dear to us as well. It boasts a marvelous cast, a witty script, a memorable score by John Williams ( credited as "Johnny Williams" ), and chic Givenchy costumes ( Hepburn dazzled in no less than eight different outfits ) but what makes the film a true delight is its setting - Paris.

The movie avoids the cobbled streets and earthy cafe life of Paris that is often portrayed in Hollywood films and instead shows us elegant Paris - a world of high fashion, fancy sports cars, museums, private jets, and auction houses - the setting one likes to associate with the world of an art collector. The film was shot in and around the city and gives us glimpses of the famous Ritz hotel, the Musée Carnavalet, the Élysées Palace along the Champs-Élysées, Maxim's, the Place Vendome, and the Rond-point des Champs-Élysées. The Bonnet's beautiful maison was located on the Rue Parmentier at Carrefour Bineau in Neuilly-sur-Seine, France, but alas...it has since been torn down.

A number of fine French actors add to the film's authentic Parisian flavor; Charles Boyer has a small and insignificant part as DeSolny, the owner of a rival auction house, and the popular comedian Moustache is featured as one of the museum's guards, who likes to take a nip when he can. Fernand Gravey, Marcel Dalio, Jacques Marin, and Roger Treville also have parts while American actor Eli Wallach has the best supporting role, that of Mr. Leland, a fanatic art collector, willing to marry Nicole just to get his hands on her Cellini Venus.

Harry Kurnitz, a prolific screenwriter of the 1930s-1960s, penned the screenplay which was based on a short story "Venus Rising" from Practice to Deceive written by George Bradshaw in 1962. Unlike most capers of the 1960s, How to Steal a Million does not focus solely on the planning and execution of the heist, instead Kurnitz lets a series of amusing situations unfold, all of which lead to the final heist and, of course, Bonnet and Dermott falling in love. L'Amour dans Paris...what could be a more fitting ending?

Bonus : Check out this site to see more of the film's locations and how they look today and this blog to read a more in-depth review of How to Steal a Million and see a ton of great screenshots. Also, an interesting bit of trivia : the famous "Nicole!".."Papa!" exchange between Hepburn and Griffith was revamped for a series of entertaining Renault Clio commercials during the 1980s.

This post is our contribution to the France on Film Blogathon being hosted by Seredipitious Anachronisms. Head on over to her blog to read more articles on French films and films set in France. Au Revoir!
The Metzinger Sisters at 1:35 PM
Share