Hildegarde Withers, a schoolmarm who enjoys cracking murder cases, was the creation of Stuart Palmer who penned sixteen novels featuring the wise-cracking old broad. She was enormously popular with mystery readers throughout the 1930s, and with film-goers from her very first appearance in The Penguin Pool Murder ( 1932 ) which starred Edna May Oliver as Withers. 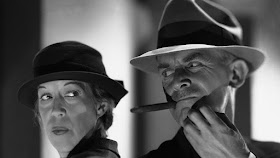 Oliver was the perfect embodiment of the snoopy schoolteacher with her horse-like face and her no-nonsense attitude. She sauntered around dangerous territories with her Queen Mary attire and her silver-handled umbrella poking her nose where it didn't belong and treating all suspects like they were naughty schoolchildren. With the aide of crusty know-it-all inspector Oscar Piper ( James Gleason ) she would try to sniff the criminal out before they snuffed her out. Gleason and Oliver's barbed repartee didn't fool audiences, who immediately recognized what a great crime-solving team they made.

RKO featured the duo in two more mysteries - Murder on the Blackboard ( 1934 ) and Murder on a Honeymoon ( 1935 ) before Edna May Oliver decided to quit the series and move onto other roles. This was a sore disappointment for Withers fans but, since Gleason was game for continuing on, RKO decided to recast the part with Louise Fazenda.

Fazenda had a long career in Hollywood dating back to 1913, and she was particularly adept at character parts. While she lacked Edna May Oliver's comical facial features, she did a grand job of stepping into Oliver's very large shoes and making the part of Miss Withers completely her own. Fazenda even brought out Miss Withers' more romantic nature, and a good dose of sugar was often mixed into her many tart remarks to Oscar Piper.

The first Hildegarde Withers mystery to feature Louise Fazenda was the most entertaining of the entire series - Murder Abroad, released in 1938. This sprightly whodunnit takes place aboard a steamer bound for London. We all know schoolteachers love to travel, but Miss Withers has not had good luck with vacations. On her last trip, she found herself enmeshed in the investigation of a dead man on a small plane. In this outing, a young woman ( Dorothy Lovett ) goes missing. She is either in hiding or has fallen over the ship's rails. While the passengers begin a search for her onboard, body after body begins appearing. The young woman's beau ( Kent Taylor ) is particularly worried, as is Miss Withers who is determined to put a stop to this killer who threatens her holiday abroad! With so few clues to work with, she comes to depending on the testimony of a particularly mischievous silver Persian cat to aide in the investigation. Murder Abroad was based upon Palmer's "Puzzle of the Silver Persian". Also in the cast were Leon Errol as an amusing Brit who has the sweets for Miss Withers, and debonair Tom Conway. 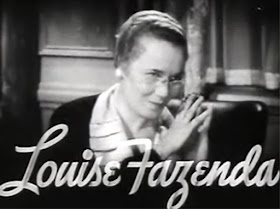 Next came Scene One, Murder ( 1940 ), an entertaining backstage Hollywood mystery that featured a number of great cameos from some of RKO's biggest stars. Once again, Withers was hoping for a grand European vacation after a particularly distressing school year, but Hitler has other plans. The invasion of Poland puts an end to her tour and so she books a ticket to Hollywood, trading the Louvre and the Vatican for the Brown Derby and La Brea tar pits. She has only been in Los Angeles three days when she is offered a job at Mammoth Studios as a technical advisor to a film version of the Lizzie Borden story. The job is perfect, for no one knows murder like Miss Withers. But on her first day at the studio, the screenwriter in the next office dies of an apparent broken neck, and Miss Withers soon discovers that a killer as vicious as Lizzie Borden herself is loose on the backlot!

Scene One, Murder features a number of great character actors such as Charlie Ruggles as Mammoth's key director ( and our number one suspect ), Clarence Muse as the security guard, and Miles Mander as the aggravated screenwriter who gets tied up. Allan Jones and Sally Eilers also star as the requisite lovebirds. Most entertaining of all is George O'Brien's cameo. From the moment Miss Withers booked her Hollywood vacation she was hoping to catch a glimpse of "Gorgeous George", her idol of the silver screen, and she - literally! - catches him in her lap at the commissary....much to the chagrin of Inspector Piper.

Despite steady box-office returns for these final entries in the Withers-Piper series, RKO wrapped up the films, focusing more attention on film noirs and westerns throughout the 1940s. It was not until 1957 that Hildegarde Withers returned to the screen for one final appearance, this time with Agnes Moorehead taking on the part. Moorehead was ideally cast. She had made a television pilot in 1955 for a proposed sitcom based on the Palmer novels, but the series was never picked up*. 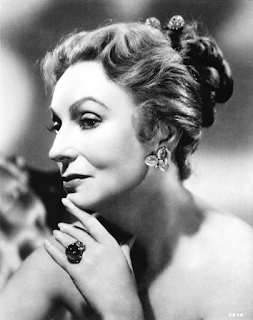 This feature film - Crossing Death - changed the character slightly, and added some new touches while retaining the spunk of the originals. The setting has been updated to the 1950s, and Miss Withers is no longer a city schoolteacher but teaches in a rural school outside of New York City. One wintry night, while driving to Miss Withers' country house for dinner, her good friend Inspector Piper ( Paul Kelly ) witnesses a roadster slam into a tree at a crossroad. The car is empty, its driver thrown a half block back. He is stone dead but his cigarette is still burning, and he has a noose tied tight around his neck. Can dead men drive? Oscar and Hildegarde certainly don't think so, and together they assemble clues that lead them to a barn theatre and its company of seven actors ( among them Hugh Marlowe, Barry Sullivan, Herbert Marshall, Elsa Lanchester and Martha Hyer ).

Wither or not you are a mystery fan, you will find each of these three films immensely entertaining and perfect for a Friday night viewing. Unfortunately, none of these titles have received an official DVD release yet and finding a copy of them may prove to be the most difficult mystery of all!

* This TV pilot was actually made, but is now considered lost.

This post is Connie's entry in The Great Imaginary Film Blogathon being hosted by yours truly, Silver Scenes. This event features reviews of "imaginary" films....in other words, what you just read was a fictional review ( accept for the * note ). We hope you enjoyed it! To read more reviews of imaginary films, simply click on this link.
The Metzinger Sisters at 11:19 AM
Share