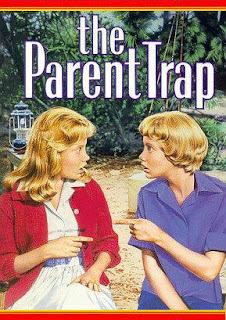 All of us have favorite films that are a little extra special to us because we grew up with them. The Parent Trap, featuring Hayley Mills, is one of those films for my sister and I. It was a favorite to watch on Saturdays when we were wee ones and it is still a beloved Saturday film that conjures up good feelings and happy memories of childhood.

Not surprisingly, The Parent Trap has been, and still is, a family favorite for many worldwide. It encapsulates everything that family entertainment should be, appealing to both parents and children. It features a wonderful cast, great music ( courtesy of Richard and Robert Sherman ), gorgeous sets ( thanks to Carroll Clark and Emile Kuri ), and a witty script. What more could you ask for?

"The nerve of that girl, coming here with your face!"

The Parent Trap tells the simple tale of identical twin sisters who were separated at birth by their divorced parents and who accidentally meet up at a posh summer camp. When the girls discover they are sisters each rave about the parent who raised them and decide to get together to reunite father and mother "for now, for always". What is their brilliant scheme to accomplish this? Swap places. California-native Susan attempts a Boston accent while Bostonian Sharon gets her hair clipped and chews her nails so Dad won't have any suspicions about her. Strangely enough, both parents are so busy with ranch duties and charity work they don't realize the change in their daughters. It is Grandpa McKendrick ( Charlie Ruggles ) who first notices the difference in "Sharon" and faithful housekeeper Verbena ( Una Merkel ) who sees through "Susan". 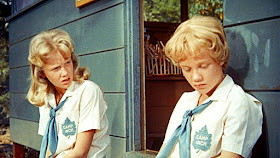 The twin's plan to spend some quality time with their parents gets foiled when Sharon discovers that her dad is about to wed a catty young gold-digger named Vicki ( Joanna Barnes ). As "nicely put-together" as Vicki is, it's all just a front and she oozes venom in her speech. It takes a surprise visit from mother and a camping trip in the woods to send this cunning fiancée home packing.

"Get me outta this stinkin' fresh air!"


This outdoor camping sequence, as well as the opening one, act as bookends to The Parent Trap and reinforce the California summer atmosphere of the film. Camping, hiking, horseback riding, and canoeing are the ideal recreational activities that most young girls fantasize about when they look forward to a summer vacation. 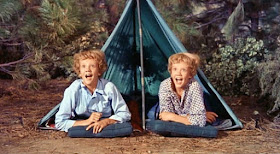 The Parent Trap was based on Erich Kastner's 1949 best-selling novel "Das doppelte Lottchen" about twins who reunite at a Lake Bohren summer camp. It was brought to the silver screen twice before Disney purchased the rights to the novel.... first in Germany in 1950 as Das doppelte Lottchen, and then again in 1953 in the UK as Twice Upon a Time with Hugh Williams and Elizabeth Allen playing the parents ( and Emeric Pressburger directing ). 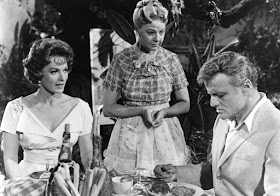 Some critics claim that the Disney film is much too long and, while it's true that certain sequences are stretched, The Parent Trap is never tiresome. The comedy deftly hops between broad humor and subtle satire. Brian Keith is especially amusing in his interchanges with Sharon, whom he believes to be Susan. For instance, in one scene when Sharon inquires about her mother, Keith misunderstands the drift of the question and awkwardly attempts to relate to her the "facts of life". It's one of many scenes where'll you find your chuckle develop into a belly laugh. Walt Disney certainly deserves credit for recognizing Brian Keith's comedy and romantic lead potential. Prior to The Parent Trap, Keith was primarily a serious action/western actor. 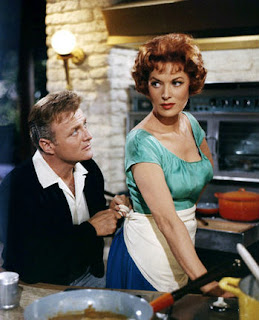 Maureen O'Hara was always adept at comedy but never was she more lovely than she is here playing Susan and Sharon's mother. She makes middle-aged maturity an enviable stage in life, and the romantic scenes between her and Keith are especially touching. Bill Thomas, who was the costume designer for the majority of Walt Disney's live-action films, decked O'Hara out in one beautiful ensemble after another. Even the cooking outfit she had on to make stew was eye-catching!

"It's none of my business....if he wants to make a ninny of himself with all those women. I don't say a word!"

Upon its release The Parent Trap was a smashing box-office success, raking in over $25 million in the U.S. alone. It received a number of fine reviews from critics as well, most of whom singled out Hayley Mills persuasive duel performance. Indeed, we'd rank Hayley as the best child actress of the 1960s. Not only did she convincingly portray two separate characters in this film but she also captured the "American spirit" and made you believe one girl was truly Californian and the other Bostonian, while Hayley herself was British! 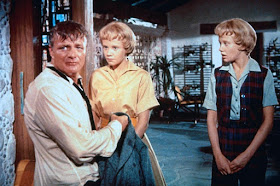