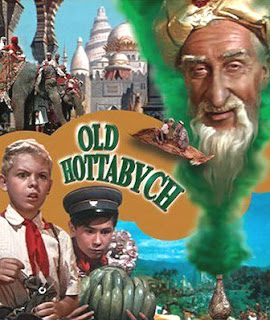 Lenfilm Studios, one of Russia's most famous film production companies, made a number of great children's films in the 1940s and 1950s, one of which was Old Man Khottabych ( Старик Хоттабыч ). This 1957 classic was based on the 1938 children's book of the same name by author Lazar Lagin, who also penned the screenplay for this picture.

It tells the story of a little boy named Volka, who discovers an ancient clay vessel that contains a 3,000-year-old genie named Khottabych. Like most depictions of genies in film, this fellow isn't what you would expect from the noble line of jinn and his acts of benevolence often result in trouble for Volka...especially since the old man is completely out of touch with modern times. However, no matter how much mischief he causes you can't help but love him as Volka does. He's a gentle old man with narrow eyes, a long white beard, a wily sense of humor, and a sweet-tooth for Eskimo pies. Much of his magical powers are contained in his beard which he needs to pluck a strand of hair from in order to weave his spells.

Like Jeannie in the 1960s television series I Dream of Jeannie, old Khottabych is beholden to his "master" for freeing him from his bottled captivity and desires to honor his savior in extravagant ways. But little Volka is a Young Pioneer ( the Soviet version of the Scouting movement ) and, like a loyal Communist, does not consider it right or just to accept riches or favors without sharing them with others. Old Khottabych doesn't understand this way of thinking and by the end of the movie, he finds that the only way he can please Volka is by sharing his tricks with everyone at the circus...which he happily joins since they serve Eskimo pies there in abundance. 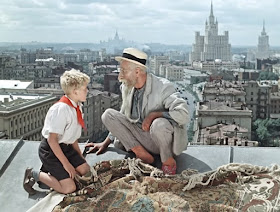 Old Man Khottabych is one of Russia's most beloved family film classics and justly so. The story is an engaging mix of fantasy, adventure, and humor with great acting and some impressive special effects of flying carpets, disappearing people, and floating objects. Nikolai Volkov gives an especially good performance as Khottabych. His relationship to Volka is like a tender grandfather and you can clearly see why in his eyes he considers the lad "the illustrious Volshya, honored of all boys". Alyosha Litvinov ( Volka ) and Genya Khudyskov, who portrays Volka's schoolmate Zhenya, are also ideally cast. 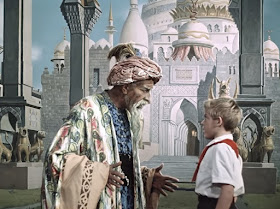 What is most interesting to see in the film is the images of city life in Moscow and the Communistic mindset of its citizens, even the children. When Khottabych desires to bestow upon Volka a palace with his name engraved on a plaque outside the gate, Volka adamantly refuses such a gift unless it is donated to his school and shared among his fellow students. An odd but admirable statement for a child to make. When Khottabych is upset with Volka's teacher, Olga, he desires to curse her but this, too, Volka puts an end to. He goes to great lengths to persuade the old man that he loves and admires his teacher. If this were an American film, Volka would be clapping his hands at the thought of his teacher having a curse put on her! Ah yes...the differences in cultures.

Old Man Khottabych won the Moscow International Film Festival Award and the Vancouver International Film Festival Award upon its release in 1957. It was released in the States three years later under the title The Flying Carpet and is currently available on DVD, dubbed in three different languages with subtitles in thirteen different languages. Unfortunately, this is a Russia-issued DVD, so unless you have a region-free player you are better off viewing the film here on Youtube. It is not only in HD but also features English subtitles. Even old man Khottabych could not conjure up a copy of the film so easily as this!
The Metzinger Sisters at 2:35 PM
Share