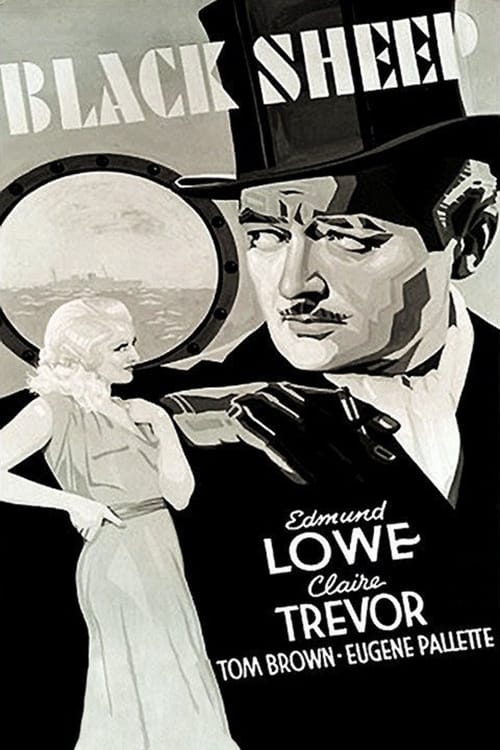 During the 1930s, there were a number of "quickie" films made that had runtimes of anywhere from 50-75 minutes. These pictures were made by all the studios and were dubbed quickies because they were quick to make ( they're also quick to watch ). Some studios, like MGM and Fox, allocated larger budgets to the production of these films than their competitors. They used feature players and some of their top writers and directors, making these movies much more entertaining than the "B" fare that RKO and Columbia produced.

Black Sheep stars Edmund Lowe as a professional gambler who befriends a young man ( Tom Brown ) onboard an ocean liner and saves him from the snare of a fashionable jewel thief ( Adrienne Ames ) who is attempting to blackmail him into smuggling her theft through customs.

He also meets Janette Foster ( Claire Trevor ), a spunky young woman who is bent on having a good time. They enjoy a shipboard romance and join forces in winning back money from two playful poker champs ( Eugene Pallette, Jed Prouty ). Herbert Mundin and Billy Bevans are also onboard but only in brief comedic parts.

Edmund Lowe was just past the peak in his long career but was still earning top billing in lesser Fox films like this one. He was such a debonair actor and added prestige to any film he appeared in. In 1935 alone he starred in nine pictures, including two other entertaining mysteries: Thunder in the Night and The Great Hotel Murder. If you want a change from watching Charlie Chan or Sherlock Holmes on a Friday night, then any Edmund Lowe mystery like this one is well worth checking out.
The Metzinger Sisters at 6:49 PM
Share