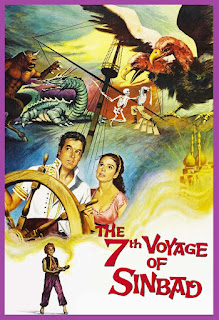 "From the land beyond beyond, from the world past hope and fear, I bid you Genie now appear!"

Legendary adventurer Sinbad the Sailor ( Kerwin Mathews ) lands on the island of Colossa for provisions when he encounters and helps rescue Sokurah the magician ( Torin Thatcher ) who is fleeing from the giant cyclops on the island. After their boat is overturned in the escape, Sokurah loses his magic lamp which is retrieved by the cyclops. The conniving magician attempts to bribe Sinbad to return to the island for the lamp but to no avail and so he shrinks Princess Parisa ( Kathryn Grant ), Sinbad's betrothed, to the size of a doll. The potion to restore her to her normal size requires the shell of a bird's egg that can only be found on Colossa. With no choice before him, Sinbad agrees to make the journey back to Colossa where he must fight the cyclops and battle with Sokurah's magic to save the princess.

The 7th Voyage of Sinbad was producer Charles Schneer's fourth film collaboration with special effects artist Ray Harryhausen and it features some of Harryhausen's finest stop-motion animation, including the first appearance of his famous fighting skeleton figure. This film was also notable for being the first fantasy film that Harryhausen worked on, having previously created creatures for science-fiction films such as 20 Million Miles to Earth ( 1957 ).

In Sinbad, our hero encounters a wide array of beasts that he must contend with. There is the giant man-eating cyclops, the two-headed roc, the fighting skeleton, and the fierce guardian dragon Taro, all of which were created by Harryhausen in the newly-dubbed Dynamation process. 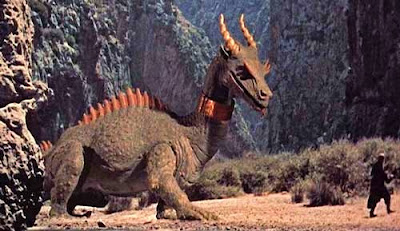 Charles Schneer pulled out all the stops with The 7th Voyage of Sinbad and it had the largest budget of any of his films to date - $650,000. It took Harryhausen 11 months to create the stop-motion effects alone, in which time the cast was filming the live-action sequences under the capable hand of director Nathan Juran. Location filming took place in sunny Spain, a locale that would be used in most of Schneer's subsequent fantasy films.
The brilliant composer Bernard Herrmann ( a favorite of Alfred Hitchcock ) was called in to compose the score for Sinbad and what he created was a marvelous and imaginative composition that conjures up ancient Arabia in its musical strains. He teamed up with Charles Schneer and Ray Harryhausen again to create the music for Mysterious Island ( 1961 ) and Jason and the Argonauts ( 1963 ). 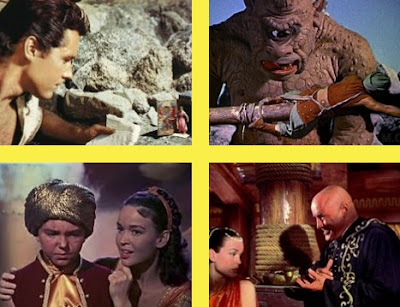 Kerwin Mathews plays our Arabian hero Captain Sinbad and he does a wonderful job with the part. His loyal companion is Harufa, portrayed by Alfred Brown, and his beloved Princess Parisa is played by pretty Kathryn Grant. Child-actor Richard Eyer also does a good job playing the echoing voiced genie, Barani. Being a loyal albeit reluctant genie, no matter what deed he is asked to perform Barani does his best to accomplish, meekly answering, "I shall try, o master, I shall try."
Also in the cast is the great character actor Torin Thatcher who redefined the word villain with his performance of the devious magician Sokurah. He desperately wants the genie's lamp and would willingly trade all the treasure hoarded by the cyclops' in place of that lamp, knowing full well the power it wields.

The 7th Voyage of Sinbad would be classified as juvenile fare in today's market, but it really does entertain no matter what age you are. From its opening sequence at sea to its finale, it features non-stop action. The film was very popular at the box office ( it earned over $3 million in receipts ), inspiring Harryhausen to pursue more fantasy films but it would not be until 1973 that audiences would see another Sinbad film - The Golden Voyage of Sinbad, which was later followed by the equally entertaining Sinbad and the Eye of the Tiger ( 1977 ).
The Metzinger Sisters at 4:27 PM
Share