Darren McGavin made five pictures for Walt Disney Studios between 1969 and 1979, one of which - High Flying Spy - he made during the height of his popularity playing on television's Kolchak: The Night Stalker. 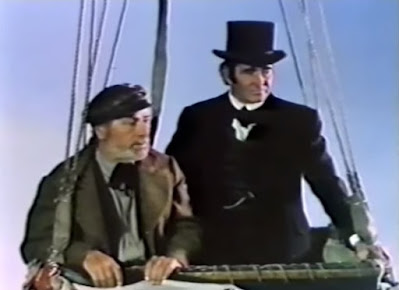 In this made-for-television film, he stars as John Jay Forrest, a rival balloonist to Thaddeus Lowe ( Stuart Whitman ), both of whom wish to become the first balloonist to cross the Atlantic Ocean. Their plans are thwarted when the Civil War breaks out and they put their dreams aside to join forces as aerial spies in aid of the Union Army.

High Flying Spy debuted on October 22, 1972, on The Wonderful World of Color and ran until November 6th, airing in three one-hour episodes. It was based on the book "High Spy" by Robert Edmond Alter, a fictionalization of real events that took place during the Civil War. The Union Army Balloon Corps ( established by Professor Thaddeus Lowe ) was one of the forerunners of the U.S. Air Force. From the air, Lowe was able to use his balloon to spy on Confederate forces and telegraph their positions to the troops below. 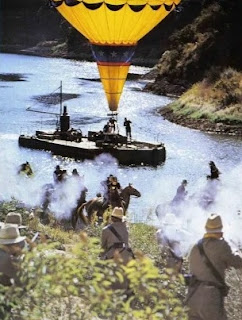 In order to make the story appealing to children, Robert Alter made the telegraph operator a young boy, Davey, who is eager to do his bit for the war effort. In the film, this character is played admirably by Vincent Van Patten, son of Dick Van Patten, another Disney regular.

Davey thought the war was going to be adventurous, but he soon wishes it was all over, especially when he witnesses his friend die. Davey shares a bond with Thaddeus, who takes him under his wing and teaches him ballooning, but when John Jay Forrest turns up, Davey latches onto Forrest and sees him as a father figure and a hero....which he turns out to be.

The film is a wonderful tale of the Civil War, as seen through a child's eye, and features non-stop action as one aerial assignment leads to the next. Also in the cast are Shug Fisher, Jeff Corey, Andrew Prine, Jim Davis, Robert Pine, and Roger Perry.