If you like piano music and classic films then this is an album not to be missed! Peter Nero was a maestro when it came to tickling the ivories. He was a downright jazzy player and his unique New York arrangements of familiar songs made the oldest of tunes sound fresh and vibrant. He was like Elmer Bernstein and Horst Jankowski rolled into one....what more could one ask for? 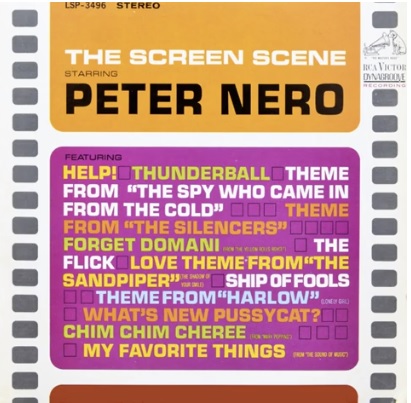 This RCA-Victor album ( LSP-3496 ) had only the newest of new film hits at the time of its release - 1966 - which included The Silencers, Ship of Fools, My Favorite Things, and the phenomenal Thunderball. There were so many versions of Thunderball released in the mid-1960s, but Peter Nero's is so aggressive and yet smooth and jazzy. After listening to it, you welcome the change of tempo to the soft and romantic strains of "The Shadow of Your Smile" ( from The Sandpipers ). This album is a real pleasure to listen to all around. Sit back, have a cocktail, and savor it!

Theme from "The Silencers"

Love Theme from "The Sandpipers" ( "The Shadow of Your Smile" )

Theme from "The Spy Who Came In From The Cold"

My Favorite Things ( from "The Sound of Music" )