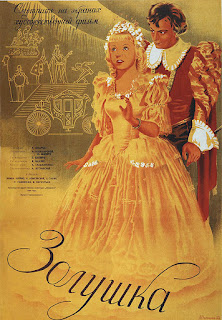 Classic foreign films are often presented as being moody, atmospheric dramas or visual voyages into surrealism, but anyone who has enjoyed a classic Russian film knows how beautiful and how colorful their films truly were. They definitely did not follow the brooding European noir-style trend of the 1940s and 1950s.

Cinderella, aka Zolushka, is a prime example of their imaginative styling. This family film combines live-action with some marvelous stop-motion animation, to create a beautiful presentation of the traditional fairy tale. It is a delightful film, filled with ingenuous characters who wear their emotions on their sleeves.

Zolushka was released by Lenfilms in 1947 and follows the traditional Cinderella fable quite closely with poor little Zolushka slaving away in the country cottage where she resides with her step-mother and her two step-sisters, patiently waiting for the day when she will be freed from them. Unlike the original story, Cinderella now has a father....the Royal Forester. Why does this father let his daughter be a servant to his second wife and his two step-daughters? Because, like many Russian films, men who are married to nagging wives are portrayed as broken men, accepting of their situation and not willing to speak against their wives. It is certainly a far cry from the portrayal of domineering Russian men that we are shown in American films.
One day, the fairy Godmother senses the child's desire to glimpse the royal ball taking place that evening, and magically bedecks Zolushka in garments fit for a princess, sending her along the way in a royal carriage with the stern warning that she leave the ball before the strike of midnight, that bewitched hour when her garments will return to tatters.

Zolushka is at the ball but a few hours when she falls in love with the young prince, a noble lad who returns her affection. Together they are transported to the Land of Magic, courtesy of the court magician, where Cinderella realizes the kind of happiness that she missed all the years before. It is at that inopportune moment that the clock strikes midnight. Cinderella flees from the palace in the nick of time, only to lose her glass slipper in her flight. This slipper becomes the only clue for the Prince to use when he seeks out the identity of the unknown beauty who stepped into his life. 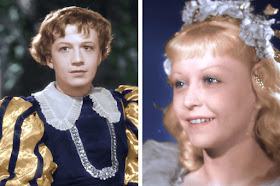 In Cinderella, all of the characters speak honestly and openly of their feelings toward each other ( good or bad ) and this unabashed candor is so very refreshing to watch. We tend to mask our feelings so often, or feel ashamed of expressing our true feelings to others, so it is truly wonderful to see characters be as frank as we, ourselves, would like to be....and should be.

Yanina Zhejmo, who portrays Zolushka, was a popular actress in the 1940s, combining the adorable facial features of Sonja Henie with the singing voice of Ilona Massey. She perfectly captured the humble qualities of Cinderella as well as her childlike nature, which is surprising, considering she was 38-years old at the time of filming. Zhejmo made a number of films throughout the 1930s and 1940s, but, unfortunately, most of these are not available online. Her final feature film was voicing the titular character in The Snow Queen ( 1957 ), one of Russia's most beloved animated classics.
Aleksey Konsovskiy, who plays the Prince, was also in his mid-thirties. While he looks like a sissy from outward appearances, this Prince is actually quite a man...and more noble in nature than most young men seen in modern films. Both Konsovskiy and Zhejmo perform two lovely operetta-like songs.

One of the most entertaining characters in Zolushka is the King, played by Erast Garin. This eccentric king has a very low patience level and when he becomes exasperated he throws off his wig and declares he is going to join a monastery (!). Outdoing his zaniness is the Minister of Dance, who naturally serves no other position but to prance around the court and amuse the king.

Characters like these, added to the fantasy animation-style settings, clearly imply that Cinderella was meant for children to enjoy. However, the film is so engaging that you need not be a child, or watch it with a child, to enjoy it. It stands as an admirable example of classic Russian cinema : imaginative, humorous, and highly entertaining.

Cinderella is available for viewing on Youtube colorized with subtitles, and in its original black and white format.
The Metzinger Sisters at 6:05 PM
Share