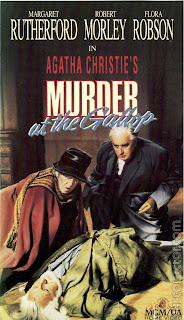 One afternoon, while collecting funds for charity, Miss Marple witnesses the death of Mr. Enderby, a death that the doctor claims was due to a heart attack. Miss Marple believes it was deliberate murder: a heart attack triggered by the sight of a cat. Mr. Enderby, a rich recluse, had "a weak heart and a pathological horror of cats. What easier than for some interested party to slip a cat into the house, a cat that the old man would come upon accidentally. Yes, old Enderby was frightened to death!"

She takes her suspicions to Inspector Craddock of the local police, whom she had worked with on a previous murder case. Craddock found her to be "of some small help" before but, upon hearing this new theory of hers, suggests she read fewer thrillers.

At the reading of the will, Mr. Enderby's family members are shocked to hear demure Aunt Cora also suggest that his death was deliberate. "He was murdered....wasn't he?" When Aunt Cora is dispatched with - by a hatpin of all weapons! - Miss Marple decides to don her Sherlock Holmes cap and solve the mystery herself. 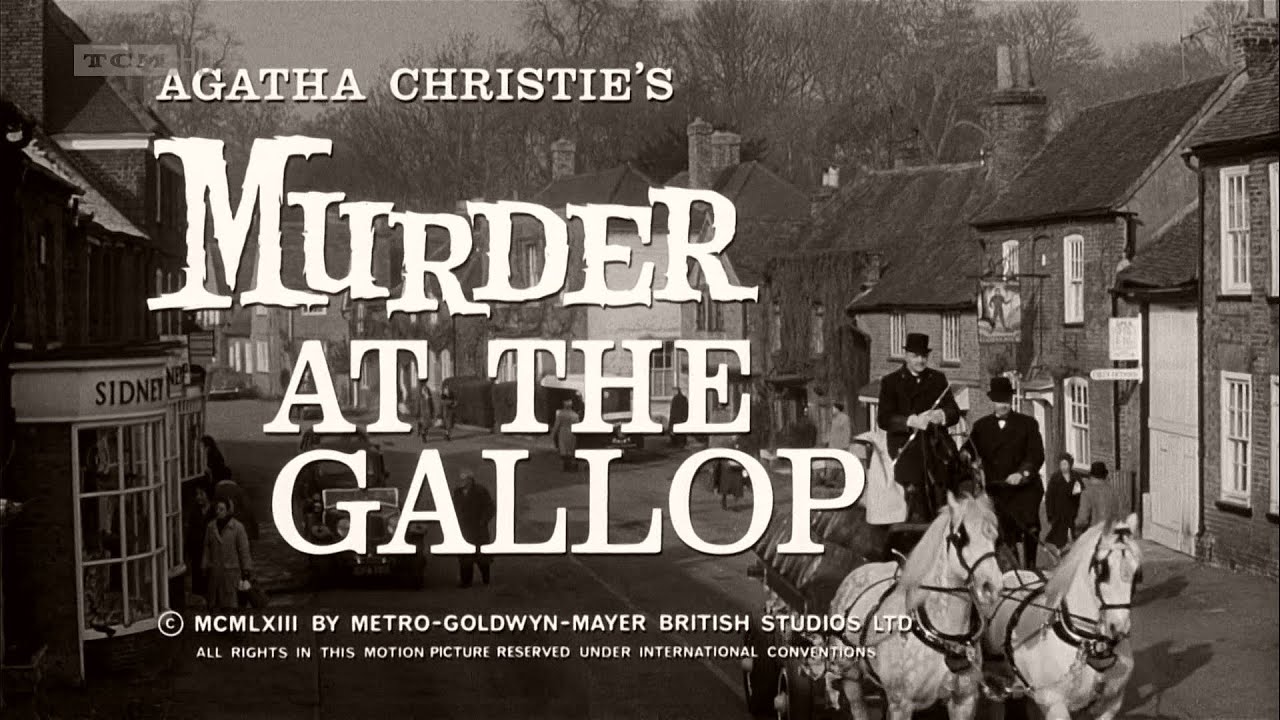 Murder at the Gallop was the second of four Miss Marple mysteries made in the 1960s starring the engaging English character actress Dame Margaret Rutherford. It was a follow-up to Murder, She Said ( 1961 ) and many of the elements used in Murder, She Said are repeated in this second outing, notably the family inheritance plot line, the eccentric male lead ( this time played by the perpetually baffled-faced Robert Morley ), the surly stablehand, and the multiple murders. Yes, when Miss Marple attempts to solve a case, murder is never a solitary occurrence. Even the finale of Miss Marple receiving a marriage proposal is repeated.

The members of the Enderby family are not as interesting as the Ackenthorpes of Murder, She Said but they do make wonderful murder suspects. Each of them received a goodly inheritance from old Mr. Enderby, but one of them is obviously out for a larger share of the money. 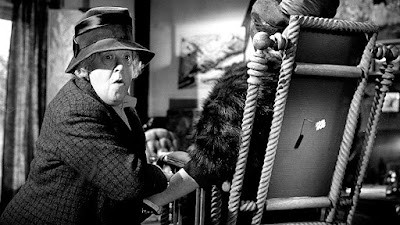 Hector Enderby ( Robert Morley ) leads the list of suspects as the head of the family and proprietor of the Gallop Hotel, where the Enderbys, Aunt Cora's companion Miss Milcrest, and Miss Marple are all staying. Hector loves to be in the saddle more than anything else and he sees "this whole murder business" and the police's presence as interference with running his business establishment.

His niece Rosamund, portrayed by Katya Douglas, is a spoiled and demanding woman. She is not overly interested in the Enderby fortune because her mind is preoccupied with curiosity as to why her husband Michael ( James Villiers ) lied about what he was doing the afternoon Enderby died. Nephew George ( Robert Urquhart ) is certainly greedy enough to murder. He quickly becomes Miss Marple's prime suspect, but when he turns up dead, she - and the audience - are forced to re-examine the case.

"Agatha Christie should be compulsory reading for the police force." 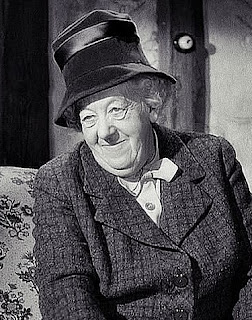 Murder at the Gallop is one of the best of MGM's Miss Marple mysteries. It was loosely based on Agatha Christie's 1953 Hercule Poirot novel "After the Funeral". Credit should be given to screenwriter James P. Cavanaugh ( a frequent writer of episodes of Alfred Hitchcock Presents ) for reworking the story into such an entertaining yet baffling mystery. Murder mysteries are often filmed as dramas or comedies but Murder at the Gallop straddles both of these genres. It is neither serious drama nor farce. It is simply an enjoyable - and highly amusing - tea and crumpet mystery.

Ron Goodwin's sprightly harpsichord music greatly contributes to the entertainment and the overall production is top-notch. The cinematography by Arthur Ibbetson is properly atmospheric and the location filming around Buckinghamshire adds to the film's appeal. But make no doubt about it, the film's most charming asset is Dame Margaret Rutherford herself, the endearing star of these films.

Rutherford's characterization of the popular sleuthing spinster bears little resemblance to the Jane Marple you will find in Agatha Christie's novels. Plump and energetic, Rutherford completely transformed Miss Marple into a spunky, emancipated, lovable old gal with a taste for mystery and mayhem. With jowls jiggling and a tongue firmly jutted in her cheek, Jane swings her tweed cape about her, squares her shoulders, and is ready to face any danger that stands in the way of her amateur sleuthing. She has an indomitable spirit that will suffer no nonsense - not even from a murderer!

Often aiding Miss Marple in her detective work is her loyal friend, Mr. Stringer, custodian of the local library in Milchester. This character was newly created for the series to give Margaret Rutherford's husband, Stringer Davis, a co-starring role in the series. Mr. Stringer, or "dear Jim" as Miss Marple affectionately calls him, is an invaluable source of support and the perfect partner to Jane. In Murder at the Gallop, he does the "leg work" in town for Miss Marple while she remains at the Gallop Hotel keeping a close eye on the suspects. At the exciting climax, they also get to perform the twist together!

The remaining cast, which includes Finlay Currie, the talented Flora Robson, Charles Tingwell as the kindly Inspector Craddock, and Duncan Lamont, add to making this an overall delightfully entertaining mystery.....one that even a loyal Agatha Christie fan would enjoy. 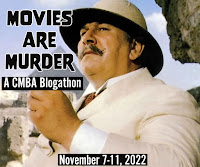 This post is our contribution to the Movies are Murder! Blogathon being hosted by the Classic Movie Blog Association. Click here to read more reviews of murder-themed classic films and click here to view the original trailer for Murder at the Gallop.
The Metzinger Sisters at 9:49 PM
Share