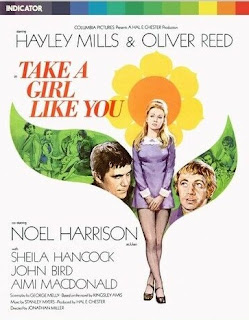 If you were to look for a summary of Take a Girl Like You, you would probably find a plot description labeling it as a sex comedy because it is....well...about sex. But oddly enough, it does not fit into that genre at all. There are hardly any bedroom scenes ( certainly nothing graphic ) and not much comedy either. It is more of a drama that talks about sex and virginity. Not my usual cup of tea.... and yet, I found it quite appealing.

Hayley Mills is one of the main reasons this film came off as enjoyable. Another actress may not have been able to convincingly play a virgin with morals. That is what Take a Girl Like You is really about: morals regarding pre-marital sex.

Hayley Mills stars as Jenny Bunn, a new schoolteacher in town. She meets Patrick, an art teacher ( Oliver Reed ), whom she is attracted to even though she knows that he likes to "play the field". When he invites her to his apartment one evening ( and not to look at his sketches ), she surprises him by telling him she is a virgin and intends to stay that way until she marries. Patrick wants to bed her and so he goes on with a lot of debates about how "nobody cares about that" anymore and such. Jenny obviously cares and - if Patrick cared for her - would respect her views, but this isn't a film about respect. It is just about Patrick trying to have "it" with Jenny. 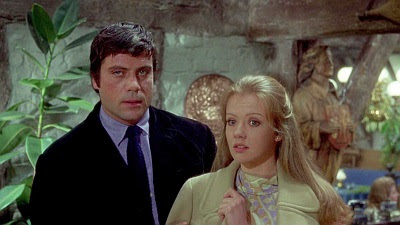 There is not much in the plot worth building a script around. Even the fluff surrounding this basic plot ( which includes her landlord trying to run for a labor party ) does not have much substance...and yet, the film was still entertaining.

Perhaps it was the location scenery. Take a Girl Like You was shot in and around Middlesex in southeast England and we get a glimpse of an average working town of the late 1960s.

Or perhaps it was the music. The peppy opening theme was sung by The Foundations who were one of the biggest British soul bands of the era. The music for the picture was scored by Stanley Myers who, in spite of the unfamiliarity of his name to most people, penned quite a bit of film and television music from the 1950s-1980s.

It certainly had nothing to do with Oliver Reed being in the film. He was never my idea of a leading man and a more handsome and engaging fellow, such as Michael Caine, would have made this story much more entertaining. Noel Harrison's presence in the film helps quite a bit. The rest of the supporting cast was made up of familiar British character actors: John Bird, Sheila Hancock, Penelope Keith, and Aimi MacDonald. 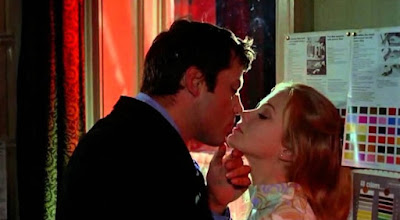 Take a Girl Like You was based on the 1960 Kingsley Amis novel of the same name. Director Jonathan Miller thought that "it was probably one of Amis' best novels but there were a lot of things to be said against filming it." Indeed, Miller felt like he had lost control of the filming as it progressed and it ultimately turned into a critical and commercial flop.

That is not surprising. It is not the kind of film you would watch with your family or even your spouse. In fact, I cannot picture dating couples attending the film in 1970 and walking out of the theater with smiles on their faces...and yet, if you watch it by yourself, it keeps you entertained. In fact, I may just watch the film again this week.

Take a Girl Like You is available for streaming on Tubi or, if you want to hear some insightful commentaries, on Blu-ray DVD.